Hey Fans, here’s another post of the classic 1978 Anime Captain Future, we hope you fans give us a response..and we may continue …but for now this final 2 parts of a  4 part episodes should we hope get you familiar with the character..Here is another breakdown for you if your coming in on it late….

The future when mankind entered the galaxy. In the seventh planet Megara star of Denneb, 61st star, the terrible illness “earth-turning disease” that the earthlings became monkeys was widespread. If this disease spreads to other stars, all planetary earthlings will be destroyed. Solar system chief cashew sends an information member to Megara star for investigation, but when the member becomes monkey, he leaves behind saying ” Space Emperor “. Cashew asked the galactic system’s largest scientist and adventurer’s captain Future to deal with this mysterious ” Space Emperor ” and “Ancestral Disease” .

The futures headed to Megara star with their “Comet” aircraft, but the boy Ken Scott aspired to enter the future men was smuggled in the ship. The future willingly take Ken to the Megara star, but somebody has attacked it before the Megara star arrived. When the futures caught their opponents and knew they were subordinates of the ” Space Emperor “, they decided to wait for the Space Emperor , assuming that the future was dead . However, the appearing space emperor has no substance, and freely passes through the wall, so it can be caught without being caught. But I guess your wondering how Captain Future going to handle this villain??  Well you have to view to find out!

Hey fans, you know we always come with surprises for you die-hard fans, Oh yeah.. here comes another oldie from 1978, This is on of my favorites also presenting…Curtis Newton, aka Captain Future, is an orphan. His parents died in their artificial satellite while he was an infant. His father was a scientist, who has abandoned earth for the satellite to dedicate his life for science along with his aging friend the genius Dr Simon Wright. Wright senses his death, and decides to implant his brain in a mechanical container. They both manufactured a superior robot and an android. Captain future dedicated his life to fight evil along with his three men, the brain, android, and robot.” Captain Future ” ( Captain Future ) is primarily Edmond Hamilton was written by the space opera is a series, is a Curtis Newton’s alias is the hero. It is also the name of the magazine in which this series is mainly published. The story depicts the battle and adventures of evil that three friends (Simon, Greg, Otto) called Captain Future and Future Men drive through their favorite spaceship Comet.The stage of the story reflects most of the solar system reflecting the 1940s when it was written , each planet has its own humanity ( such as Martians ), and most planets and satellites in the solar system There is an earthling colony, and each planet is living together. By the way , nuclear power as an SF gadget appears, but it is not a real fission reaction . The date was set in 2015 when the “Terrible Space Emperor” incident occurred . 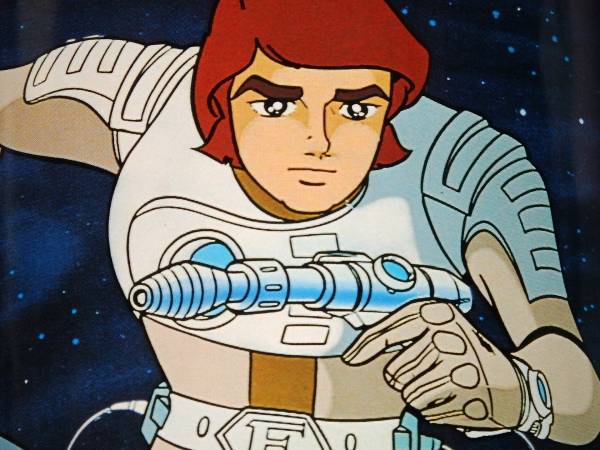 Captain Future and Future Men dedicated spacecraft. Future Men originally designed and produced. The hull is teardrop-shaped and is made of three Innertrons (fictional metal) with a special insulator filled in the gap.

Boasts the fastest solar system with nine high-performance cyclotron propellers (normal fuel is powdered copper ). The normal engine sound is “characteristic like rotating a circular saw” and is different from any other spacecraft, so it can be recognized immediately. Equipped with a high-efficiency injection mechanism, allowing underwater navigation. By installing a vibration drive later, super light speed navigation becomes possible and boasts high performance capable of intergalactic navigation. In the “Lost World of Time” incident, a time propulsion machine is installed and time travel is also carried out.

Equipped with two proton guns as fixed arms. Other characteristic equipment is the “ comet camouflage device ” that disguises itself as a comet by wearing charged particles outside the ship, the “ halo device” that can navigate close to the sun, and the “gravitometer” that detects gravity. Equipped with a “Mitiorometer” that detects asteroids. In addition, the ship is equipped with a very compact yet extensive research facility, various materials, medical facilities, etc., and supports the activities of Captain Future as a scientist. Well we give you a little of  the background ..but we’ll let you get familiar with the characters yourself sit back get your popcorn and enjoy this classic space opera..and as always we thank you fans for supporting our site